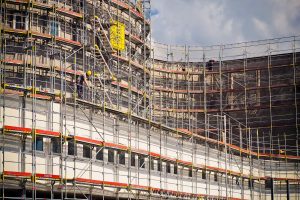 It is undeniable the Coronavirus is spreading at a devastating rate affecting many industries all over the world of which the scaffolding is one of them.

We have witnessed an overwhelming number confirmed cases of the Coronavirus in the world, with many people in the United Kingdom testing positive for the virus.

In a direct attempt to slow down the spread of this pandemic, over the past year, the government put up radical plans to help slow down the spread of this dangerous respiratory infection. We have seen these measures to get more stringent as the situation has changed. Some of the restrictions have included the closing of schools, the cancellation of mass gathering and supporting the workforce to work from home.

It is not possible for workers in the scaffolding and the construction industry at large to work from home. This is a limitation that has necessitated structural and operational changes in construction companies as they try to align business with the “new normal”.

Many workers have not been able to attend work as the outbreak of the pandemic hit peak levels. Therefore, companies like Wako Kwikform have had to provide guidelines internally and to their clients seeking modular scaffolding services on how they wish to move forward in the face of the adversity.

The COVID-19 reached the industry after energy firm EDF, a firm that is currently building the two new nuclear reactors plants, confirmed that one of the workers Hinkley Point C had tested positive for the virus.

Supply Chain for Materials has Been Affected

As expected, the supply chain for sourcing of raw materials from other countries has been affected as national lockdown and international travel embargos have taken effect.

To meet earlier business plans and targets, the company told Scaffmag of its plan to operate at full production capacity through the winter months until February last year. Also, the company intends to expand the stocks at the German factory and its other 140+ service centres in different cities of the world.

Layher says the capacious production plan was laid out early in anticipation of the heightened demand they expected during the spring and the summer seasons as it has been traditionally the case. However, Layher insisted the plan to increase the amount of their stock had begun much earlier because of economic uncertainty brought by Brexit.

Layher says they are confident a large amount of stock in their reserves is enough to see the company through the many months to come.

The announcement of the lockdown in most countries in the world has frozen the issuance of training courses not only in the United Kingdom but also all over the world. The implication is that many scaffolders are unable to acquire the needed training to guarantee a high level of work safety in the industry.

Also, Scaffolder CPD courses are not being provided and many scaffolders are lacking the opportunity to reinvigorate their CISRS cards and therefore remaining stuck.

Training in the scaffolding is key for both the beginners and the experienced professionals who need to continually adapt to changes in law and methods of best practices in the industry. The inability to conduct training has forced leading experts in the industry to come up with ways to ensure learning continues as it should such as video conferencing.

The government has shown a commitment to support ongoing construction activities in the country despite the ravaging effect of the pandemic. This government support has been made available albeit with restrictions to curb the spread of the virus.

The construction industry has been greatly challenged because it has had to deal with the safety concerns typical in a construction site as well those occasioned by the virus. Workers have had to maintain social distance to avoid the spread of the Coronavirus in the construction site.

We have availed the internal document called ‘Guide for Scaffolders’ to our clients for their use. This is a document that will be revised shortly to include the latest revisions that include SOP as produced by the Construction Leadership Council.